This week the theme has been ceramics.  In the first part of the week I attended a 2 hour workshop ‘Pottery with Ave a go Ceramics‘ and towards the end I went on a tour at the National Museum  of their current ceramics exhibition “Fragile?”

First the pottery workshop; well it turned into a day of frustrations for a number of reasons, but sitting spending a couple of hours working clay with my hands was quite therapeutic.  We had to make a model of our hand, got chance to throw a pot, and then make anything else we had time for.  I was one of the first to get a go on the wheel.  As any novice can attest to, it is a lot harder than it looks – and I guess takes a lot of practice to get the knack, once you’ve got it, it looks beautifully simple, and simply beautiful objects can be made.  Our instructor Matt ensured that everyone who went on the wheel managed to produce a worthy object [i.e. there was quite a bit of help going on!].  Mine was a goblet, and at the end of the session it stood with everyone else’s pots looking lovely.  How I wish I had taken a photo of it then.

My ‘hand’ was ok, and I also made a little Green Man plaque – although even that caused me some consternation and lots of feelings of unworthiness, but was passable by the end.

However, at the end of the session it turned out that no provision had been made to fire our pots etc by the organisers who had booked the workshop, and that we could basically just take them home. Everyone was a bit non-plussed – what was the point? Eventually a vague plan was arranged for us to take them home, then bring them back at a later point to be fired.  This didn’t really help me as my journey home was on the train, with a 20 minute walk at the other end – holding two plastic plates containing a goblet, hand and greenman wasn’t really a goer.  Luckily a lovely lady who works in my building offered to take my clay objects home in her car – and for this I am eternally grateful.  As it was, though, my goblet had collapsed by the time we reached her car.  I’ve stood it up again, and it subsequently fell over, and was re-stood-up by her (thankfully – so that it wouldn’t harden with the top on its side).  I wasn’t quite heartbroken, but rather sad that the once beautiful object had been reduced to a clumsy mockery of a goblet; complete with smeared slip, fingermarks, and a shrunken shape.  Not sure when they will be fired, but I am sure I will be disappointed when they are returned to me, sigh.

So a day that left me fragile, complete with a fragile creation.

Later in the week however I got a tour of the contemporary ceramics exhibition ‘Fragile?’ at the National Museum; there was only time in the tour to focus on a few of the exhibits, and I am sure I will return to spend more time going round the exhibition.  These are a couple of highlights for me: 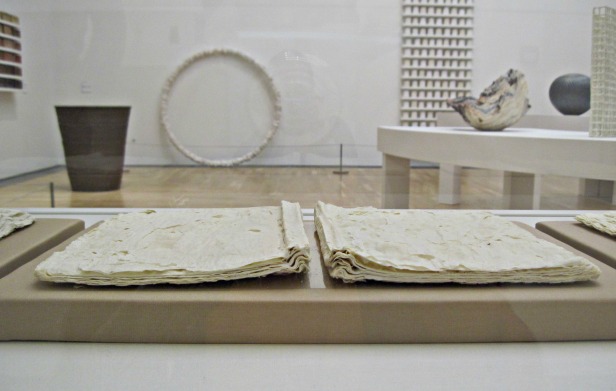 1) “Soul archive” three ceramic books, created by an Iraqi artist Harim Al Karim whose family were persecuted under the Saddam Hussein regime.  He spent two years living in a hole in the desert, before being able to leave the country. His precious notebooks, filled with sketches and political comments, he turned into ceramic pieces, dipping each page in slip.  He did this to protect the people who looked after them, and his own memories.

Our guide told us that these were the most fragile pieces in the exhibition, on loan from the V&A, and only the curators from the V&A were allowed to touch them.  They are gradually crumbling away.  She also told us that many people barely glanced at them when walking through the exhibition as they look so unassuming;  but hearing the story behind them really brought them to life for me. 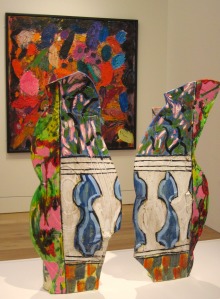 2) “Diptych: the balcony” by Betty Woodman, not only was this a great piece, from many different angles, but I especially liked the juxtaposition of the Picasso and the Gillian Ayres to either side of it.